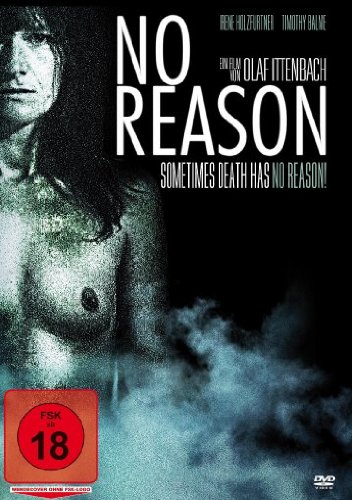 “No Reason” is an extreme horror film, from German director Olaf Ittenbach. It was released back in 2010, but has since been out of print. I spent a fair amount of time searching for the film online and managed to find a bootlegged copy. Ittenbach, started out as a practical effects specialist, and quickly showed interest in getting behind the camera. He has since been responsible for some of the most extreme films to come out of Germany, such as “Dard Divorce” and “The Burning Moon”. No Reason is a story of Jennifer (played by Irene Holzfurtner), and her husband Sebastian (Mathias Engel), who are planning to take their young son Nico (Dominik Buhler), and move from the crowded apartment complex they currently reside in. What starts as a normal day quickly spirals out of control. Jennifer receives a disturbing letter containing a cryptic poem, her elderly neighbor supposed to babysit Nico because the usual babysitter has mysteriously disappeared, and to top it all of Jennifer suspects her husband of cheating with the missing babysitter. She takes a bath in order to relax but she accidentally falls asleep. She awakens to a room full of mutilated bodies scattered across the floor, but she has no memory of what happened. A mysterious masked man seems to have all the answers, But what does he want from Jennifer??

I liked the opening shots where we see a young mother and father playing with their daughter in the front yard. It looked like it was shot on a 16mm camera, but after seeing the film I’m not sure if there was any relevance to include that as the opening, it still looked good though. Accompanying those opening scenes is a really nice piece of piano based music. It’s a very Americanized theme that you don’t normally hear in European cinema. Given the modest budget, the film has a pretty loud and clear audio track and the camera work is decent during most of the scenes. My copy had hard-coded English subtitles and they were all synched correctly, so that was an improvement on the last German film I watched “Knochenwald” *see review*.

The acting was a mixed bag. A lot of the secondary characters didn’t get much in the way of dialogue and what they did say wasn’t all that interesting. The masked man and Jennifer are the two characters with the most amount of dialogue. A lot of what gets said centers on Jennifer’s life, and the choices that she’s made. Irene should be commended because she has to carry the emotional punch of the film all on her own and that’s a tough ask. A few of her breakdown moments seemed a little exaggerated, but other than that she was very consistent. Olaf’s great work in practical effects is on display once again. The quality of the effects are top-notch and even felt a little to real (eek). I can handle a decent dose when it comes to blood/gore and the violence that goes along with that, but even I have my limits and I think this was a bit much for me.

There is a short segment at a bondage club, where women are urinating on men, you also see a women performing oral sex on a man who then has his penis bitten off (fully shown). The level of sexual violence is quite high and may offend viewers. The violence in the “red segment” (which has a certain representation, watch the movie to find out), contains gun shots, women being repeatedly whipped in the face, a man being wrapped in plastic and beaten to death, another man having his penis cut completely down the center (it’s all very graphic and meant to be for shock value). I don’t enjoy brutal sequences that are written for shock value and have no other purpose, I don’t believe in portraying violence in that way. However, I can still acknowledge the wonderful and realistic practical effects, once again Olaf does a great job with them.

There are technical issues with the lighting in most of the film. A lot of the scenes in the second half are far too dark, especially during Jennifer’s conversation with the drug dealer. I think it was intentional to light each act of the film so differently. With a better script, using a different color scheme to represent the various levels of “hell” could have worked. Instead it just came off as an unnecessary gimmick. When the deaths of each person from the apartment building occur, some of the sound effects either don’t match the weapon being used or the timing is out of synch. I’ve seen that mistake made plenty of times, but I didn’t expect it from an experienced filmmaker like Ittenbach. Even with some good camera work, the film still suffers from really poor editing. During the scene where Jennifer awakens to find the bodies, we get about 25 or 30 shots in less than half a minute (yes you heard me), it was unbelievably rapid, horrendous on the eyes and totally unnecessary. At other times they tried to edit the footage with a stagnant look, almost like it was in slow motion but it wasn’t. Why do that??, It didn’t add any artistic value, nor did it elevate the scene it just came off looking like a post production goof.

The biggest problem with No Reason is the incomprehensible storyline and the structure of the details. It’s wanting to be something like “Hellraiser” meets “Memento”, in the sense of two narratives more or less going on at the same time. It doesn’t take long before you get completely confused and because it’s kind of told back to front, you can’t get back on track. I didn’t get the chance to know any of the characters other than Jennifer. I know the story revolves around her, but the issue is she’s not all that likable to begin with. The plot revelation of everyone appearing to be someone but really being someone else, only works if the characters are fleshed out properly and here they aren’t. Creating these layers of hell, minus the little puzzle box, is a plot point pulled straight from the “Hellraiser” films. The cryptic book that Jennifer reads from revolves around satanic stuff which is shown in a very surreal and confronting way. The content of the film is just too damn depressing, a very dark and ominous tone, with a lot of sick visuals all leading to the revelation that Jennifer might not be as innocent as she seems (I didn’t think she seemed it anyways but..).

I was looking forward to watching No Reason. I saw the trailer and I know the quality of Olaf’s practical effects and thought I might have been in for a bloody good time (pardon the pun). Unfortunately this is a journey into the macabre depths of hell. Much like the French film “Martyrs” this one pushes the limit, and not because it has a great story to tell, just simply because it can. With a running time of just 75 minutes it feels every bit of that, because the stuff you’re witnessing is to depraved and lacks the cohesive structure needed to tell a worthwhile or interesting story. This is for fans of only the most extreme European cinema and it’s not for me. If you want great gore and suspenseful storytelling, try Alexandre Aja’s “High Tension aka Switchblade Romance” or “Inside”.