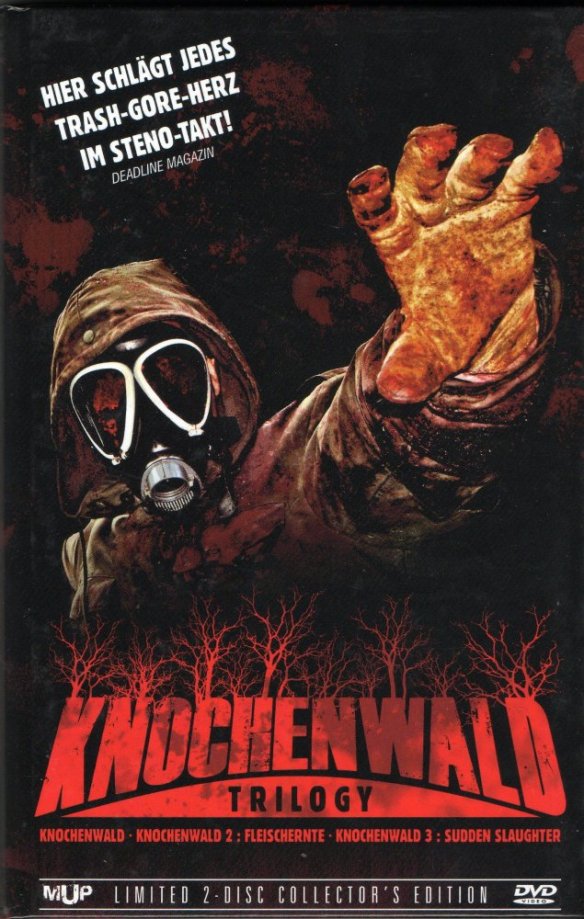 I recently found this out of print, bootleg version of a German Splatter film made 15 years ago called “Knochenwald”. I collect low-budget films that can be difficult to find, this one is that rare that it didn’t even come with English subtitles, it’s artwork or a case. As you can see I did find the artwork and although reminiscent of “My Bloody Valentine”, it’s still pretty cool. Knochenwald started as a 23 minute short film which led to two full length sequels, only one of which came as part of my two disc purchase. Now, before I start the review I didn’t watch the whole second disc so I am only critiquing the first part. The film is about Mike Mansfield (yes probably a nod to Mike Myers the iconic killer, not the Austin Powers star haha). Mike is a serial killer who kills random campers in the woods, and yes, that’s it. I’m a lover of Peter Jackson’s early gore based films all the way through to some of the modern Italian and Asian splatter films, such as “Adam Chaplin” and “Tokyo Gore Police”, so I usually know what I’m in for, or so I thought. 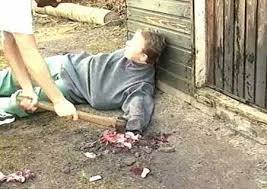 Knochenwald has a pretty cool synth theme song, which sounded like it was straight out of the 80’s. Usually the Europeans go for a heavy metal based soundtrack, so it was a nice change of pace having that classic appeal. No one can deny, that given the films short running time, actor and director Utz Marius Thomsen, gives the viewer a respectable body count. I didn’t keep count but I think around 7 or 8 characters were killed, most of them being campers randomly walking around as you do (haha). I commend Thomsen on a couple of the cool practical effects like the blood sprays and one decapitation scene. Some of the prosthetics looked pretty decent considering this was made on a shoe-string budget. If I had to guess, I’d say somewhere between $500- $1,000 (don’t quote me on that), but yes you heard me correctly. Unfortunately even with this being a short film, that kind of money isn’t going to come close to cutting it. With cheap cameras and rented equipment, your chances of delivering anything worth watching are slim.

Firstly, I’m extremely disappointed with the fact that the film doesn’t include an option for English subtitles. I know the dialogue probably wasn’t crucial to the story or should I say lack there of, but we’ll never know. The audio levels throughout are incredibly inconsistent. Obviously there was no money to use a boom mic, so it’s just on board sound from the camera. Considering it’s all in German, I didn’t really care if I could hear the audio but that’s not the point, a German would. The editing is sloppy as hell and the framing is all wrong in most of the scenes. The whole thing screams student film project, and looking at the age of Thomsen and his buddies, I think it might have been. It’s that shot on video look where all the color is washed out and the shots look grainy. To be fair, 15 years ago technology was completely different so I can only judge it in comparison to other films of that time.

This is one of the first (and I hope), only times I’ve watched a completely plot-less movie. Most splatter/gore based films don’t have to contain much story or character development, but you can’t abandon that aspect entirely either. In the beginning, the masked killer picks up an axe and kills a random guy. Cut to a bunch of friends camping in the middle of nowhere and the killer has somehow found his way to this new location without any clear transition. The film has no continuity. Characters separate, having no reason to split up other than for the killer to target them one by one where they can’t call for help. I didn’t need to understand the dialogue to see how terrible the acting was. It was on display right from the first reaction to a killer roaming the woods, they were cringe worthy.

Now I thought maybe the effects could give the movie some redeeming value, sadly it was not to be. I get when you’re working with basically no money it can be difficult to set up decent death sequences. My opinion is that unless you can really deliver you probably shouldn’t be doing it. I applaud the effort in spilling plenty of the red stuff, which Knochenwald does. However, The blood being sprayed and some of the sound effects aren’t even in synch with the impact of the weapon hits. That’s a huge no-no, I can accept the problems that are down to budget, but those are things you have control over and should get right. You have to get them right if you want to be taken seriously. During the kills that include the use of prosthetic limb’s and people being cut in half, you can clearly see actors arms behind their backs or legs covered over by something. Everything is so obviously fake and these are gags that can’t be seen as realistic.

It’s not often I say it but Knochenwald was $20.00 I’ll never get back, and with the price of petrol these days, I could have used it! I have only reviewed the first part, I couldn’t bring myself to watch the 90 minute sequel. Horror and gore related films can be made well on a limited budget, if you have people who know what they’re doing. This was a film made by a young man whose clearly a fan of the genre. But without a crew, without a DP (director of photography) and without anyone who knew what the hell they were doing, this was doomed from the start. If you’re looking for low-budget gore and aren’t fussy on the technical flaws, look no further than Italian films “Adam Chaplin” and “Taeter City”.