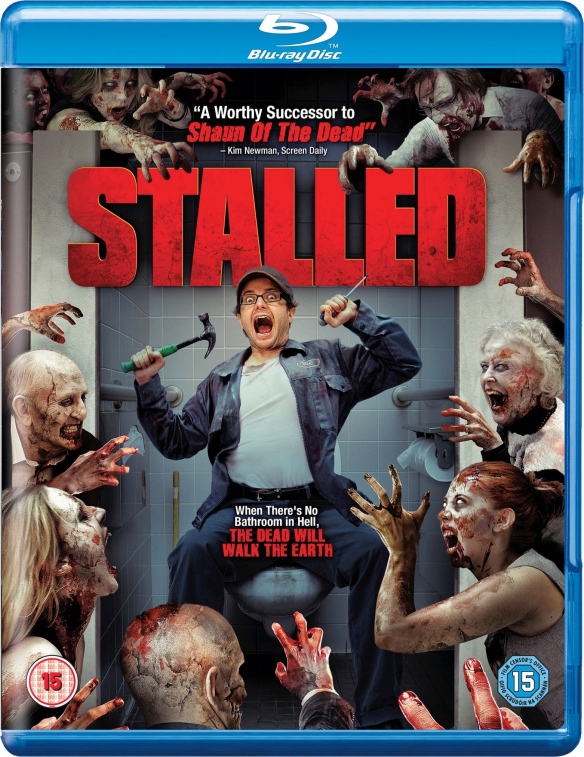 “Stalled” is a recent Christmas themed zombie/comedy in a wave of these style of films since “Shaun Of The Dead”. With Director, Christian James at the helm and Writer, Dan Palmer playing the lead character of W.C you can tell this was by fans for fans. I feel like this is a film not many people heard about other than those keeping an eye out on the film festival circuits. W.C is a janitor in a regular office building living a pretty mundane existence, that is until he gets trapped in a women’s restroom during a zombie outbreak on Christmas eve. He must use everything and anything at his disposal to survive if he’s any chance of getting his life back on track. The film also stars Antonia Bernath, Mark Holden and Victoria Broom. I will be the first to admit I’m not the easiest guy to please when it comes to zombie films. I prefer mine serious and most of what I’ve seen in the comedy element of them just never seems to work. The fact Dan wrote the screenplay and plays the lead character works in favor of the film. After all, no one is going to know the material better than the guy who wrote it. 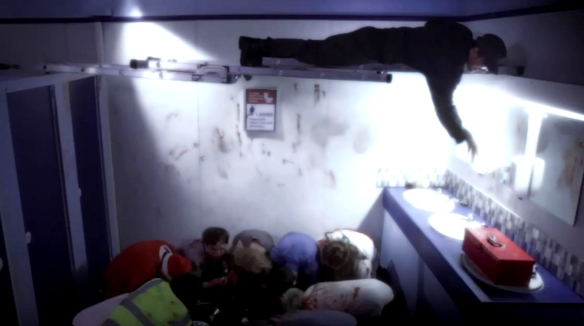 The zombie apocalypse has been covered more than any other sub-genre of horror in recent times. It’s hard to write aspects that haven’t been done before. But having the confidence to set your film all in one location, that location being a restroom takes a lot of guts. The budget is a modest one yet somehow this all seems to comes together. The camera work and shot choices are incredibly diverse given that 90 percent of what we see is either in the toilet cubicle or just outside it. You will get a two or three-minute scene and within that scene there will be 20 different shots all within a square metre, it’s really fresh to watch a film like that. The crew really makes the most of the one location. The audio is really good and the lighting is fantastic. The color scheme of the entire film blends whites, greys and blues and really works well under the light. 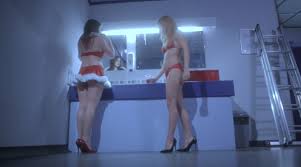 From a character point of view there’s enough back story on our main man without the zombie stuff becoming secondary. When Heather (Bernath) enters the fold, it brings a more human element within the subject of dying and regrets or things you wish you could change, I liked that. This film plain and simply wouldn’t work if Dan’s performance wasn’t solid. Thankfully he wrote the material and showcases how well he knows it delivering a natural performance. I enjoyed a lot of the little, not so obvious clever and witty remarks. The puns are very English (that’s a good thing) and one line had me laughing as hard as anything. The action gets started nice and early which is always a positive thing. It’s all practical blood and gore and though it’s not copious amounts, it should be enough to satisfy most fans of the genre. I don’t want to spoil a few of the standout deaths but I’m just going to say any kill involving a toilet seat should impress those who admire the use of unique objects for killing zombies.

The dialogue and a few unwanted scenes were the only things that felt out-of-place in Stalled and didn’t add much in the way of entertainment . It’s all personal, but in my opinion the core of a joke might start out funny but when taken to ridiculous lengths quickly becomes tiresome and in the case of a few jokes here, childish and crass. A couple of the passages of banter between Heather and W.C from stall to stall seemed like unnecessary filler and weren’t that funny, just aimed to push the boundaries of political correctness. A definite overuse of profanity, which I admit in a few cases aided in the humor, for the most part felt like a teenage conversation. The situation with his phone was a bit far-fetched as well. I know Dan was probably just trying to incorporate a scene where he would attempt to get in contact with someone from the outside world. Ultimately though, that scene went nowhere and probably should have been cut in order to stop audience members questioning the odds of the phone actually working at that point. The dance montage after William decides to take a trip (so to speak), was really out of left field. I’ve never been a fan of scenes like that, I think they are far to stupid to ever be funny.

Most of the zombies look pretty cool, especially the ones that get close up shots or are more prevalent in the action sequences. The secondaries/extras didn’t have the same attention to detail in their makeup as the core zombies did. When you’re going for consistency you want to put that same amount of time and detail into everyone in the shot. Especially when the film only consists of about 15 or so actors. As much as I enjoyed the action and the blood and gore it didn’t feel like enough. Other than an unsuspecting zombie getting a toolbox in the face the finale left me wanting. This could have gone all out in the last scenes. Maybe a fight scene using stationary equipment as he attempts to escape the building could have supplied the audience with carnage only ever seen in a Peter Jackson splatter film. Like I said, nothing wrong with the action we get but I’ve always been a fan of the more the better.

Stalled was a genuine hidden gem amongst the zombie/comedy genre. I purchased the Blu-ray not expecting it to deliver on entertainment as much as it did. Give me this any day over the self-aware look at me likes of “Zombieland” or “Shaun Of The Dead”. I find the Brits are making better zombie films than anyone else these days. Stalled is proof. It’s exceptionally shot, paced nicely with good lead performances, jokes a plenty and lots of fun gore. I think it’s one of the best zombie films we’ve seen in a long time and you should just “Grab your bra, pull your finger out” and get out of here and buy it! haha.