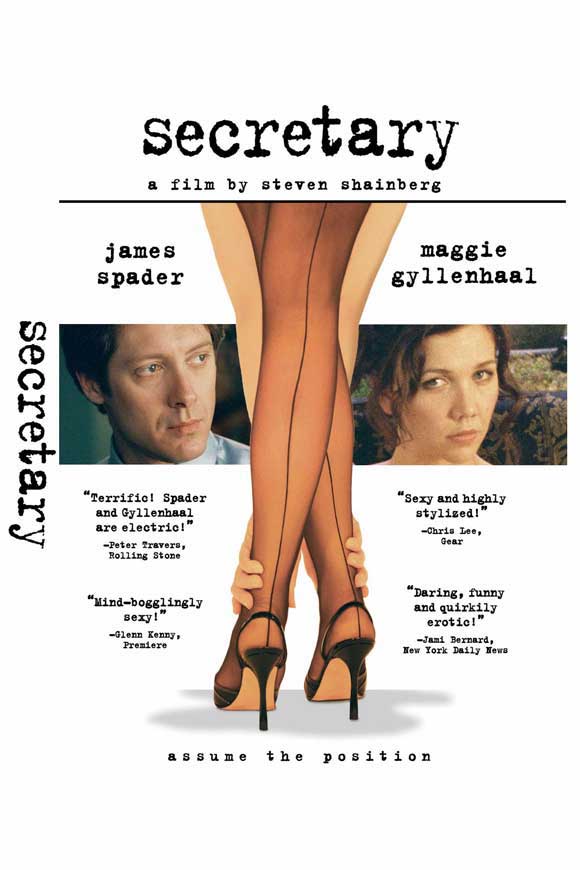 “Secretary” is a film I’ve heard a lot about over the years it’s directed by Steven Shainberg and it stars Maggie Gyllenhaal and James Spader. It was released back in 2002 and for the most part contains the exact same plot as the smash hit book series and soon to be major motion picture “50 Shades Of Grey”. Sadomasochism has been covered somewhat in films pre dating Secretary, such as “9 and a half weeks” with Kim Basinger and 2001’s “Birthday Girl” with Nicole Kidman, neither of which I have seen. I went into Secretary with a completely open mind but honestly not a lot of interest in the subject matter. Lee Holloway (Gyllenhaal), has just been released from a psychiatric facility after having battled depression for most of her life. After arriving home to very disconnected parents, her mother Joan and her father Burt. Burt’s addiction is alcohol and Joan tends to bury her head in the sand when it comes to both her husband and daughter. Lee knows how to type and type well and decides to use that talent in applying for office/secretary positions. She lands a job with mysterious and sullen lawyer Edward Grey (yes like Mr Grey will see you now.. *rolls eyes*). What starts out as a regular office employer/employee relationship quickly turns sadistic and sexual in nature as the two find something in each other the other so desperately longs for. The film also stars Jeremy Davies, Stephen McHattie, Lesley Ann Warren and Jessica Tuck. 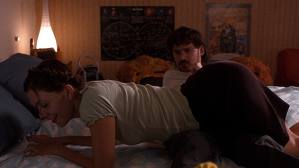 The decision to cast Maggie (whom at the time, only had a couple of well-known credits to her name), in such a demanding and particular role was probably a little risky. After having seen the film I think her performance speaks for itself. She manages a lot of different emotions and I commend her on being comfortable enough for full frontal nudity and effortlessly embracing all the idiosyncrasies of her character. James Spader has been in the business for a long time and I don’t think there’s much he can’t do. He’s always been a great character actor, rarely the captain but always a reliable crew member. I enjoyed some of the narration from Maggie, giving us a little insight into the incident that landed her in a mental facility and the ongoing struggle that it is to keep a level head and not resort to old habits. The subject matter and the dynamics of the master/slave relationship or however you choose to put it was a pretty original idea (long before 50 Shades was thought of). 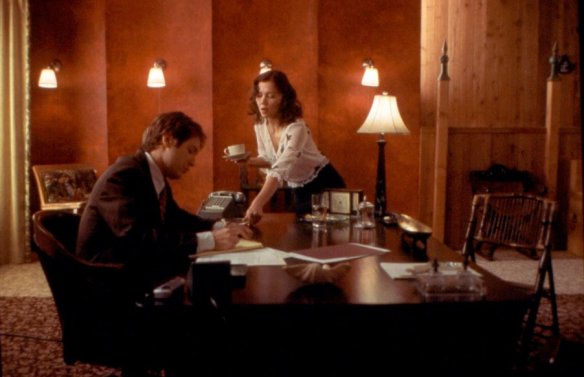 It’s a really well shot film there are lots of particular cuts and shot choices, along with some unique positions. It gives the audience a very voyeuristic look at the relationship between Lee and Edward and what they do to each other. Angelo Badalamenti who is one of my favorite scorer’s, responsible for David Lynch’s films amongst many others over the years, brings a very quirky and free-flowing score to accompany the dialogue. There was a particular piece of music during Lee and Edward’s first meeting with which the brass and string pause points flowed with the tone and diction of the dialogue, you don’t see or hear that too often. The content within the story is sufficient enough for you too see the compounding issues that Lee has with relationships and trust. The introduction of Peter (Jeremy Davies), lined up as a possible love interest for Lee by the family seemed very random, I might have missed how they knew each other in the first place, I can’t remember. The development and character arc of Lee isn’t there in the same fashion when it comes to Edward. He has his quirks and things in his life you’re not fully privy too but no single scene ever stays with him long enough to discover his deeper inner fears and thoughts.

I wasn’t sure on some of the details about Edward either. it seemed to me with his random questioning during the “interview” process that he had some mild form of aspergers. A lot of the things he said were very random and not at all what you would ask in an interview. It get’s very personal very quickly and at that point he doesn’t know Lee’s mindset and what she may think is appropriate or not. Does Edward have any family?, Does he have any form of love in his life? He seems to have love for the orchids in his office and a real paranoid mindset about vermin, constantly asking Lee to set traps for mice or rat’s? I’m not sure what that was all about. It’s a very nicely furnished and clean office why would there be mice?. I guess those were all just parts of his personality that didn’t need to be addressed, or at least in the writers minds it didn’t. I found most of Lee’s problems seemed to stem from daddy issues, who knows if there was abuse when she was younger or was it just a lack of interest on his part in knowing his addiction was causing a problem for the family. Also, I would have thought that Lee’s stint in a psychiatric facility would have to have been disclosed before any job applications or before getting the job with Edward, I suppose it’s not that important but if you’re looking for realism. 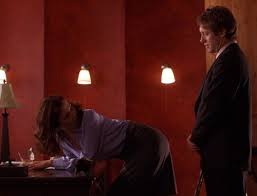 For a hot-shot lawyer Edward doesn’t seem to have many clients either. They could have at least incorporated a few more visitors to his office, other than just the phone ringing. I might have missed something but Trisha, the women that comes to his office Was she supposed to be an ex gf or ex-wife??. She seemed very agitated and he didn’t want to see her, maybe an unsatisfied client? Who knows. On another note I didn’t have a problem so much with the relationship between Lee and Peter but I’m not sure why Lee was going along with it when she didn’t have any real feelings for Peter. Was it just to keep her parents happy? I feel like those scenes weren’t crucial in the context of the story. After all we know what kind of dynamic she is drawn too and she’s not going to get that from him so why lead him on?. I found the pacing to be a little bit slow and 10 to 15 minutes could have been cut off the running time and it still would have kept things neat. 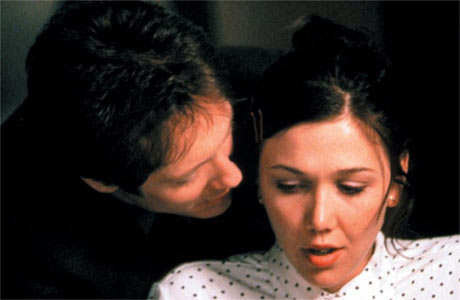 There’s no denying Secretary is a well made movie, given the subject matter and the budget ($4,000,000). It’s well acted, smoothly shot and the soundtrack is great. For a topic I don’t have much interest in and can’t really relate too in my personal life its a difficult one to critique objectively. At its core I think this is a love story, a very different type of love, a love probably you and I won’t ever have. It’s dark, it’s manipulative and sometimes cruel but it’s whatever you want it to be. The last piece of dialogue from Lee sums it up, they appear to be like everybody else but underneath the surface they know the dynamic of what they are looking for and what they need, it’s not right and it’s not wrong it’s just all personal. Each of us have our own way’s of connecting and I suppose that’s how you find the right person for you. Interesting.