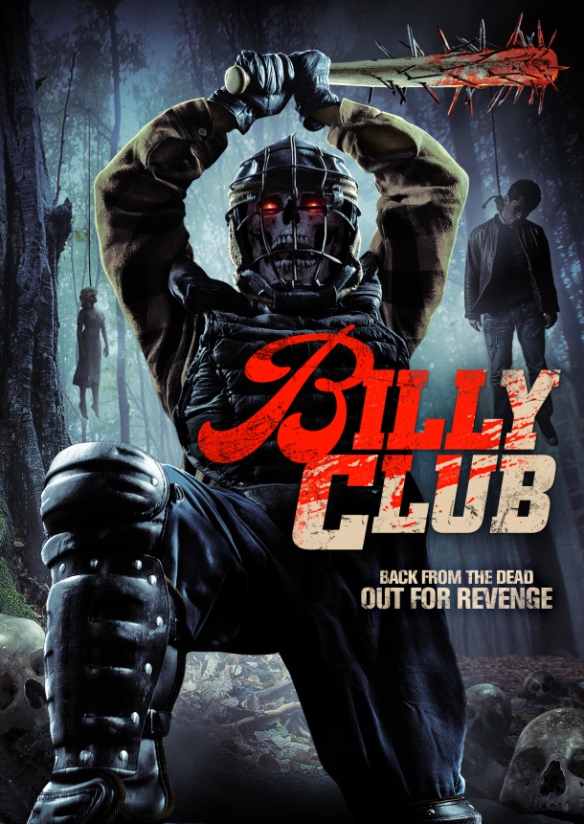 Firstly I just want to say thanks to both Drew Rosas and Nick Sommer, co-writers and directors of the 80’s inspired slasher film “Billy Club”, for allowing me early access to the film before its official release date of November 4th. Billy Club is a film about four old friends that reunite after 15 years to remember two of their fellow little league friends and coach who were murdered by another teammate Billy Haskins back in 1981. Bobby, Alison, Kyle and Danny head out to a cabin for some time to reflect on events of the past. What they don’t know is that someone in an antique umpires mask has come to settle an old score. The film stars Marshall Caswell, Erin Hammond, Nick Sommer (writer/director) and Max Williamson. 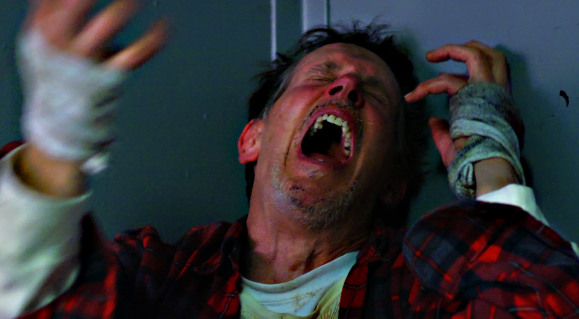 Batter up! I have been following this film for over a year and keeping updated on news through imdb about the eventual release. I love the various artwork and posters for this film along with the cool concept of someone in baseball umpire equipment going on a killing spree. I think with such a long wait to build this film up in my mind and given the genre and budget it was never going to actually reach the heights I was expecting.

I have already spoken about the premise of the film and the poster being really cool, I won’t speculate on the budget of the film because it’s not listed anywhere. It’s an independently made film so you can imagine there wasn’t a great deal of money behind it. The sound effects and audio were impressive right off the bat (pardon the pun haha) and there is some very impressive quick cutting and editing throughout most of the film, particularly the opening scenes. It’s not anything spectacular but just gives things a fresh feel. Edits involving the killer putting together his weapons, filing cabinet draws opening, people taking out news clippings etc etc. The acting for the most part is about what you would expect from a slasher flick, none of it is amazing but it’s all above average and believable enough within the confines of the story. 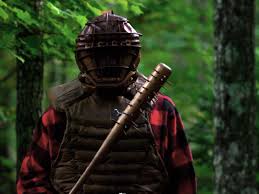 I liked the more comedic scenes involving Kyle and his sexuality (haha), they were awkward but gave me a few chuckles. I didn’t really care about the ten minutes that was wasted on mushroom tripping when there could have been killing and it kind of took me out of the film for a while. Let’s talk about the kills, a couple of them came very early on which was nice but they lacked originality and didn’t contain enough blood or gore. I was immediately thinking this isn’t going to be what I’m hoping for but fortunately the last couple of kills were both impressive. I won’t spoil them for you because although they occur late in the movie and are probably a little predictable, they are pulled off to perfection, I only wish that all the kills were of the same calibre.

The film circles back around in the final act but I found a lot of scenes had pacing issues. The camera work is pretty smooth and nicely cut together but in a lot of the internal shots the camera framed the actors faces way too close and it definitely loses something when you do that. I don’t think the film generated much suspense either but since it was kind of a homage to the 80’s films I can forgive that (because none of the 80’s films did). The lighting during a lot of the night scenes wasn’t perfect either. I liked the style in which the flashback scenes were shot but I didn’t like the look of the colors. I can’t remember the actual term for lightning or darkening a shot but it needed a few adjustments. The last thing involving the technical stuff would have to be the music choices. I found most of the background music was just a hinderance, no overly catchy songs or matched appropriately to the tone of the scene.

I thought the aspects of the story were quiet good but the structuring was all wrong. I had a hard time following the timeline of events. For example Billy hunts down a women on Halloween night (whom I think was from the little league team years before) and it’s shot in the same flashback style as the 80’s stuff but she was an adult, so if it was only a few days or something before the events of the film then why bother?? Or was it supposed to have happened years before, but why would she be older? And if so why wait so long to kill the other team members? I don’t really know about any of it, it was all kind of muddled. The emotional scenes involving the accident that’s plaguing the four characters seemed a bit melodramatic. The opening campfire scene springs to mind, with those speeches about paying respects to those who died and what these team members meant to them, I mean it’s little league right?? I don’t remember kids I played hockey with at aged 12…. There are several scenes that just didn’t work. The pizza guy crashing his car in such a lack-lustre way and then being killed in an equally as unimpressive way, I don’t know maybe I’m just hard to please but I think Nick and Drew could have gone all out with the deaths given that the practical effects I did see looked fantastic!

Billy Club is a slasher that does a pretty solid job of capturing that 80’s vibe. It has some of the best editing I have seen, some good laughs, cool practical effects (I just wish there were more), and a fun little twist in the final act. I don’t know if this warrants multiple viewings (unless your with friends), but if you know what you are in for you can have some fun with it. Support these types of low-budget films and guys like Drew and Nick, I’m pretty keen to see what they come up with next, Cheers guys!!