Firstly I would like to say thankyou to both Producer, Lorraine Keith and Director, David Ryan Keith for allowing me to view a screener of their new indie slasher film “The Redwood Massacre”. It’s filmmakers like you that allow me to keep my blog up and running and keep the viewers reading. The Redwood Massacre is a typical 80’s style slasher fare about 5 friends that are heading out on that all to familiar camping trip in the woods. This time it’s to visit The Redwood House, the murder site of a local legend. Little do the group know that someone still haunts the woods and is out for their blood! The film stars Mark Wood, Lisa Cameron, Lisa Livingston, Rebecca Wilkie, Adam Coutts and Lee Hutcheon.

Well there are plenty of things to like about Keith’s Redwood Massacre, The quality in the production value is the first real standout. With an estimated budget of just 150,000 pounds, this looks exquisite. The cinematography and editing is fantastic and David makes perfect use of the location and it’s surroundings. The intro score was wonderful, it sounded like something right out of a Tobe Hooper film. The audio levels and smooth camera work are amongst some of the best technical work I have seen in the horror genre this year. At no stage does anything become to shaky or experimental, it’s all very concentrated and professional work. The acting from most of the cast is generally pretty good. I found the emotionally driven scenes to have much more substance then some of the general chit-chat dialogue. That’s pretty rare given that most performances feel forced when the actors really have to “act”. Lisa Cameron’s performance became a little bit tedious in the second half of the film but more because the character was quiet annoying (obviously written that way), so in a way I suppose she did her job (haha). 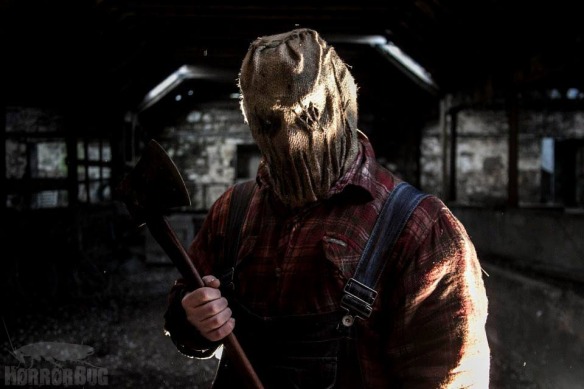 The Killers mask (I never caught his name, if he even had one??), although not very original still look super cool. Anytime you can’t see an actors face the character convey’s that little bit more doom and gloom and in the situation this group finds themselves in that really works. The two best aspects of The Redwood Massacre are the back story surrounding the legend and the films blood and gore effects. David must have read the handbook on Slashers 101 and I commend him for that. It’s key that you have at least one or two kills in the opening 15 minutes of your film because it gets the audience involved nice and early. A lot of slasher films these days are waiting for that body count and trying to give the viewers that extra bit of suspense but it comes at the cost of not delivering on what everyone paid to see. I’m happy to say that within 12 minutes David delivers with some action sequences (if you don’t count the opening scene, that is). The red stuff continues to flow consistently throughout the film’s 82 minute running time and it’s great!

Overall there isn’t much wrong with The Redwood Massacre and the things that I did pick up on were mostly small. Obviously ignore the fact that this thing can’t be passed off as overly original in design or execution but at the same time it’s not trying to be, it’s a slasher and we all know what we are in for. However, the characters lack any real personality. It’s normally those standout traits they possess that make them either loveable and you root for them to survive or on the other side of the spectrum you hope for their untimely demise because they are horrible. Our group of five don’t really project much and therefore it’s difficult to care about any of them. I suppose in a film like this it still works for you as a viewer if you want them to die (haha). I thought the way they were all supposed to be friends was a bit of a stretch too. I don’t know many friendships where the dynamics are the same as they were with this group. The fact that most of the film only has one guy was a little odd as well. I didn’t realise the english accents were going to be so strong and it definitely sneaks up on you. Most people would be expecting this to be an American horror film when it opens up but, alas.

The suspense missed the mark a little bit in a few scenes. The opportunity to build a kill sequence with some creepy music and sound effects wasn’t taken. Jess’s painted on eyebrows ( I don’t know if they were though haha), whatever those things were they were awfully distracting. I hope to god those are not her real eyebrows! the poor girl. There are a few errors in continuity and such throughout the film. A few of them include the stranger that appears early on in the film and then without explanation is there towards the end. I think some sort of connection needed to be made earlier on. There is an editing problem in one scene where the killer is right near one of the victims and then next minute she has been able to hide with literally one second to spare, not sure what happened there??. The writers missed an opportunity to incorporate a scene that would lead to the capture of Jessica and Mark (I think it is?) and the scene ends up feeling cut and pasted.

The Redwood Massacre aside from a few small issues is one of the best slasher film’s this year. Given the small amount of experience and somewhat of a low-budget, the cast and crew make the most of what they have. The only thing stopping this from being the best indie slasher of the year was that there was clearly a budget allowed for blood and gore but no time and effort was spent on prosthetic pieces for the wounds and that would have just created more authenticity to go with the realistic blood and gore, maybe next time! The Redwood Massacre epitomizes the 80’s slasher and just adds a dollop more of the red stuff into the mix making it better than the 80’s!

I just ordered David’s first film “Attack Of The Herbals” which I will have a review for soon. Be sure to support this film and check out the trailer and Imdb page at http://www.imdb.com/title/tt3242756/?ref_=nv_sr_1

My rating for “The Redwood Massacre” is 7/10