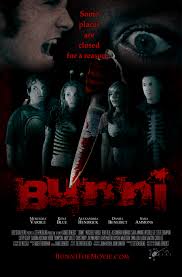 Firstly, I just want to say thankyou to Daniel Benedict (writer and director) of the independent slasher film “Bunni”. I appreciate getting the opportunity to watch the film via a screener. Bunni is a film about two young couples that following a Halloween party, find themselves inside an abandoned warehouse being stalked by a twisted killer hiding a dark secret. The film stars the beautiful Sara Ammons, Sabrina Hulsman, Alexandria Hendrick, Kent Blue and Daniel Benedict.

As far as slasher/horror films go Bunni has familiar plot details and similar locations to most other movies in the genre. It doesn’t really contain anything we haven’t already seen. I thought the introduction had some really cool unnerving imagery. I liked the smooth panning of the camera and some of the close shots. We get an official introduction to a young girl named Lisa (Hendrick) who is in a domestic abuse relationship while trying to care for a child. It’s a pivotal point for the rest of the film and it was handled very well. I liked the suspenseful score throughout the action scenes and some of the metal music accompanied the tone very well too. The dialogue audio started out very hollow and tinny, although that was probably more because of the location the film is set in. Fortunately it was altered and improved for the second half. A lot of the dialogue between boyfriends and girlfriends is pretty lame. It’s fun in that cheesy kind of way but nothing of any importance ever really gets said. Combined with the fact that a lot of the profanity feels really forced. Daniel plays Rick (the jock of the group) the character was very reminiscent of Alastair Gambles character of Steve in the trashy/exploitation film “Gutterballs”. I hated him, I think everyone will! I thought Daniel’s acting was decent but the lines were very over the top.

The rest of the characters are basically cardboard cutouts from every slasher film you can think of. Ashley (played by the beautiful Sara Ammons) was fantastic to look at but couldn’t pull a serious line off. Chris (Kent Blue) is the more serious “gaming nerd” type of character that you know there is more than meets the eye too. Chris’s girlfriend Nikki is played by (Sabrina Hulsman, another absolutely stunning girl) she is able to kick some major ass when the time comes, that was cool. I think the ability to cast gorgeous girls in a film like this helps in its entertainment value. I thought Sabrina was decent, sadly I can’t say the same for Sara. I don’t know if it was the way the character was written but she was just very ordinary. However, these actors and actresses have basically no experience so with time I’m sure they will improve. I thought the randomness of “Hulk Hogan” (I have no idea what was up with that guy haha) was hilarious. Some of the secondary characters provided a little something too. I thought the killer’s mask had a really unique and cool look and some of the practical effects (considering the micro-budget) are worth mentioning. The opening kill and some of the guts and entrails were very well done.

It disappoints me in saying that the bad outweighs the good in Bunni though. There is lighting issues galore. I’m sure most of that is down to the location and the fact that 90 percent of the film takes place at night. Unfortunately on such a low-budget (estimated just $2,000) It’s about what you would expect. Sadly it doesn’t make for good viewing. The acting from most of the cast feels forced so it’s hard to invest much attention into the performances. The music was something I liked but it was a little overpowering in the mix. I thought the kill scenes would have raised the film up a little bit but they were also very disappointing. I always take budget into consideration when critiquing a film though and you couldn’t even buy a crappy car for this sort of money! Each time the action heated up and blood was about to be shed, the camera cut away. Combine this with the bad sound replacement and weak fight scene choreography and it makes the overall action fall flat.

Bunni is the type of movie that you can tell was made simply for the love of the genre. When you take into account the acting experience, the budget, the script you can’t ask for that much from the end result. I thought the film picked up speed a bit in the final act with a really cool twist that I didn’t see coming at all! It also has a very short running time of just 60 minutes! so it’s worth watching. It was interesting watching some interviews with Daniel about where he has come from with film over the last 5 years. I commend him on taking a chance and putting his passion for it to good use. Bunni is worth checking out due to it’s fun nature, gorgeous girls and short running time, I just wish it was something that I cared to revisit again, thanks again though Daniel.