Here it is, by popular demand, the much-anticipated review for the new Syfy epic “Sharknado”. It stars Ian Ziering (Beverly Hills 90210) Tara Reid (American Pie films) and the beautiful Cassie Scerbo (Bring It On:In It To Win It). I just read an article on the film that said it’s been the highest watched film that’s aired on the SyFy channel. Is it any different to anything else the Syfy channel puts out? Probably not. So why was there so much hype about this film? Of all the shark based films that have aired direct to TV, what makes this one different? I will tell you what makes it different: It’s such a fun, ridiculous movie that nobody attempts to take serious and the viewers know this. It was very well marketed and it has been very successful.

A freak hurricane is headed for Los Angeles. Fin Shepard (Ziering) a local bar owner and surfer, along with his misfit group of friends, attempt to help his family and get them to safety. Tara Reid play’s April, Fin’s wife or ex-wife? I can’t remember. Cassie Scerbo plays Nova the bartender. John Heard (Home Alone) also has an entertaining little role as the local drunk. The storm quickly gets out of control and it appears that tornado’s are on the way (Oh No!).

First off guys and girls, the title. “Sharknado” haha, Isn’t that the best thing you have ever heard? Joint names have been done with every other film so why not here? Something about that title really stuck when the film was in the process of being promoted. The cast for the most part are all solid. I think Ziering carries the film, Reid really offers nothing except a lot of bitchy snide remarks. I suppose the character was written like that. Scerbo is the gorgeous eye candy but also has some “kick ass” bones in her body! A couple of the casting choices I thought were pretty weak. For one having the token Australian “bloke” was really lame. I’m not sure if the Americans think they can appeal to us with that? If they do, I’m here to tell them you can’t. The young girl and guy who played Fin and April’s kids were really miscast. For one I doubt that both Ian and Tara would be old enough to have kids that look like they are about 30.. I guess it’s not important in a film called “Sharknado” though.

The look of the film is much like everything else on the Syfy channel, fake. It’s fake on purpose, probably due to the budget and the nature of these films. I have since read that the crew used big fans and sprinkler systems to create all the rain. The film was shot on perfect summer days and everything was simulated on the day or in post production. Complete set’s were designed in pools and backgrounds made up of CGI. Look, there are issues galore with the CGI. The sharks do look really fake, even for the Syfy channel. I like the crew to try something new and different to improve the look, but they never do. I can forgive it because I have come to expect it. The aspect of blending real life to computer generated graphics when it’s this bad, can’t be ignored.

Some of the editing and changes that were made like full CGI bridges. These were added to join an on set location that they were filming at. Surely the correct bridge could have actually been found and then water and flooding added later in post production? I am a firm believer that anything you can do practically, you probably should. I have horror films to thank for that rule. They did get the CGI blend correct a couple of times. I particularly like the ferris wheel chasing the group down the boardwalk. There is a solid amount of action packed into an 85 minute running time. The one thing I keep expecting and Syfy never deliver on, is the blood and gore factor. We get one or two good decapitation or kill scenes but majority of the kills occur off-screen or the camera just cuts away. It’s very disappointing. I don’t watch these type of films for story or acting, I watch them for the blood and gore, the fun nature of them. So when they don’t deliver on that, I’m always disappointed. Up the body count guys! 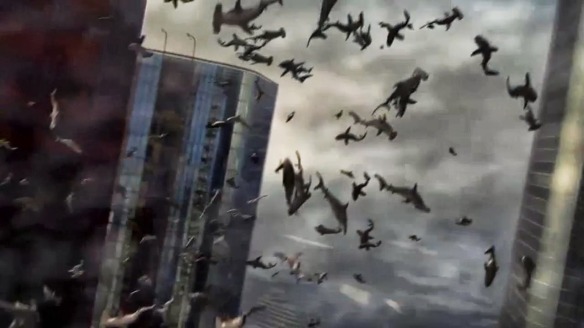 All of its issue aside “Sharknado” is a blast. It has some classic cheesy references to other low-budget sci-fi films. Cassie Scerbo is reason enough alone to watch it, she is stunning. Anything that has Steve Sanders (Ziering’s character in Beverly Hills) shooting flying sharks with a handgun as they come out of a tornado, has to be gold haha. I won’t spoil it but the chainsaw scene will go down as one of the best kill scenes the Syfy channel has ever seen! This film is utterly non-sensical and completely illogical but you know you just have to watch it. This is destined for cult status, what a romp!