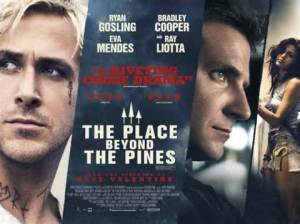 THE PLACE BEYOND THE PINES

“The Place Beyond The Pines” reunites both co-star Ryan Gosling and director Derek Cianfrance (Blue Valentine) in this Crime/Drama about Luke (Gosling), a motorcycle stunt rider struggling to make ends meet, in the hopes of supporting his infant child and ex girlfriend, he turns to robbing banks. This dangerous path he chooses puts him in direct contact with a young rookie cop named Avery, (played by Bradley Cooper). The film also has somewhat of an ensemble cast, including the likes of Eva Mendes, Ray Liotta and Ben Mendelsohn. 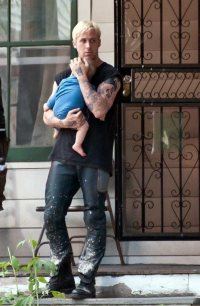 What I didn’t know about “Place Beyond The Pines” before going into it, was that it was more of a character study on the upbringing of children and the effect it has on them, later on in life and the relationships that they form. I also didn’t know that the time span of the film was set across 15-20 years, from our main characters in the beginning of the film to the future generation in the final act and the events of that time in between.

Originally I thought it was a very cool idea and the first act of the film backs this up. We meet Luke and see that he is a stunt rider for a carnival. Tending to keep to himself and do his job is all Luke has but it’s only a short time until he runs into Romina (Mendes), who he had once had a fling with. He visits her home shortly after and finds out that he has a young son. He is struggling to make ends meet and even though, after meeting Robin (Mendelsohn) and making the decision to begin robbing small time banks, his heart is in the right place. He is wanting to be the father that his own father never was. This is the exact moment we are connecting to Luke and we know he isn’t going about things the right way but you can forgive him because he has good intentions. 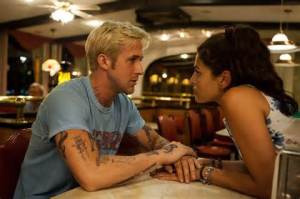 I really liked the first act, great pacing, some nice wide lens camera shots, some cool motorcycle scenes, and some very powerful acting again from Gosling, proving why he is close to the best in the business at the moment. As Luke he conveys so much emotion without saying much at all, I like that his character was written that way. The grungy, poor look they gave him really suited him in the role, I particularly like the scene in the church, he breaks down with tears, but from what? we don’t know, none the less a very powerful scene. At the end of the first act Luke’s luck is looking like it may run out, as we are introduced to Avery (Cooper) who is a rookie cop on the force. While he is out on one of his patrols, the two men cross paths and (without giving away spoilers) there is an altercation.

After the first initial climax scene of the film, which I must say was an incredibly gutsy move to make, with the actor and calibre of his ability, I was very surprised, I thought it was a fantastic twist but at the same time, this was the moment I thought where will they go from here?? The second act of the film is set a few years down the track, this is where it  loses its momentum, its sense of originality and rawness just dissipates. We follow Avery as he weaves his way around the police force, having been promoted, he is amongst some very crooked cops and suffers through the internal struggle of wanting to be an honest cop or conforming to what he know’s everyone wants him to be. This is of course the plot outline for plenty of other cop films (Training Day, Heat, Pawn and many more) Bradley Cooper does a solid job but the character written is very one-dimensional, he makes some very poor decisions that question, is he a good person? is he in the right line of work? and ultimately he really isn’t someone who you can see yourself following for the long haul. 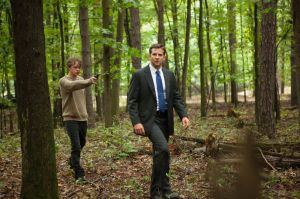 Once the film hits the 100 Minute mark, we skip to 15 years down the track, you guessed it!, both Avery’s son and Luke’s son form a friendship at school (neither of which knowing the connection), the mutual love of drugs and parties being the catalyst in their friendship forming overnight. This is where the writing gets very sloppy, the information that is uncovered by one of the boys about the past and the roles the two fathers had in each others lives is very convenient and not at all well structured or thought out, realistic? probably yes, but lazy. Computers seem to be the answer to everything, I would have like to see Avery’s record wiped clean or something by the anything but honest cops at his precinct and had some what of an investigation by Luke’s son into the events from years earlier?? instead we get the laziest of steps with no tension or suspense ( that’s not to say Luke’s son) played by Dane DeHann was not more than on par with the rest of the cast, because he was. Avery’s son however…., I’m not sure why a wealthy white kid from the suburbs spends the whole movie talking like a black guy from the projects?? It was once again horrible writing, out of context and very forced.

This last act of the film was very weak, any momentum the film had left was washed away. At 2 hours and 24 minutes this film is probably 40-45 minutes to long anyway, it seems drawn out for the sake of the character development, which I found to be non existent after about the hour mark anyways. I think this film had potential to be new and original, to contain strong memorable characters, no doubt in my mind this was mis marketed as a crime/thriller and I would describe it as a much slower, straight up family drama film, with an element of the crime genre about it. This would be almost one of the most disappointing films of the year for me, I had high hopes. I shouldn’t have.